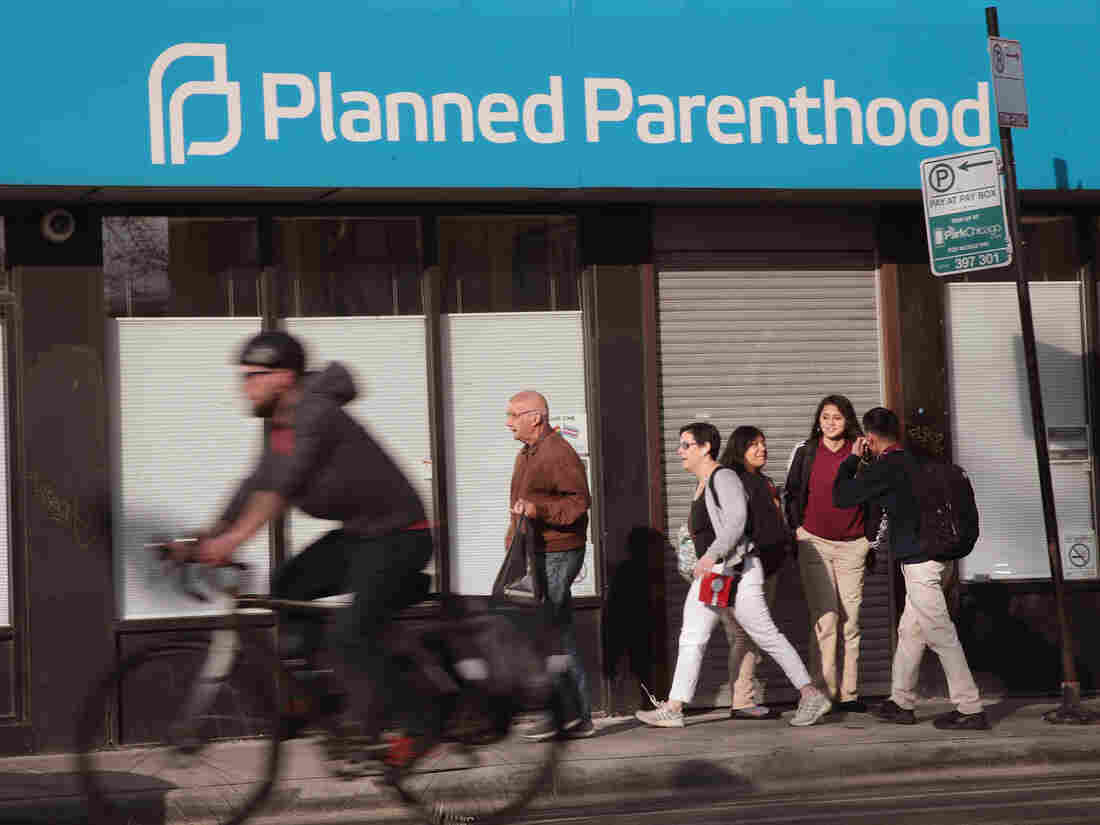 Planned Parenthood’s affiliated clinics, like this one in Chicago, provide wellness exams and comprehensive contraceptive services, as well as screenings for cancer and sexually transmitted diseases for both women and men. Scott Olson/Getty Images hide caption 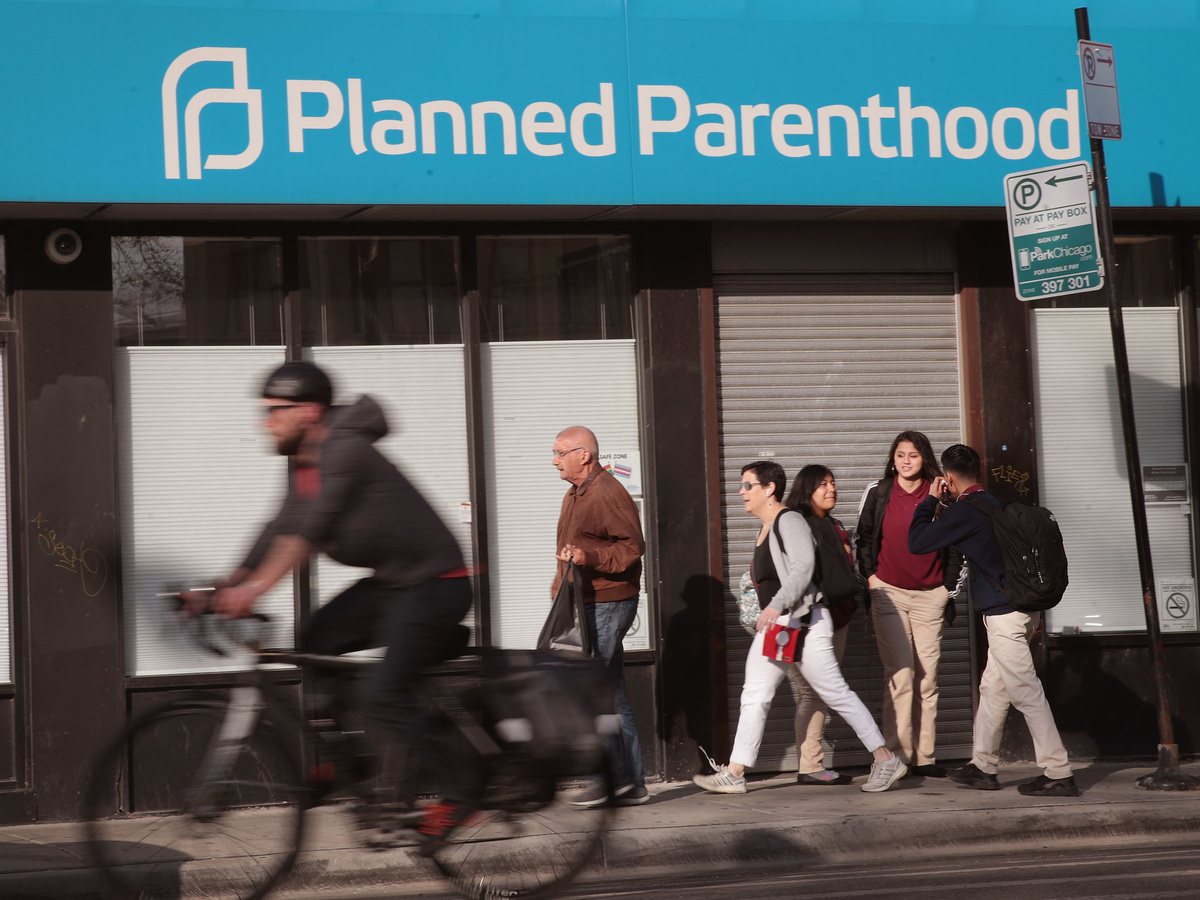 Planned Parenthood’s affiliated clinics, like this one in Chicago, provide wellness exams and comprehensive contraceptive services, as well as screenings for cancer and sexually transmitted diseases for both women and men.

The planned revival of a policy dating to Ronald Reagan’s presidency that was slightly retooled and quietly submitted for federal budget review Friday may finally present a way for President Trump to fulfill his campaign promise to “defund” Planned Parenthood.

Or at least to evict it from the federal family planning program, where it provides care to more than 40 percent of that program’s 4 million patients.

Congress last year failed to wipe out funding for Planned Parenthood, because the bill faced overwhelming Democratic objections and would not have received the 60 votes needed to pass in the Senate. But Trump’s move Friday could potentially accomplish what Congress could not.

According to administration officials, the proposed rules they have submitted to the Office of Management and Budget would require facilities receiving federal family planning funds to be physically separate from those that perform abortion; would eliminate the requirement that women with unintended pregnancies be counseled on their full range of reproductive options; and would ban abortion referrals.

All those changes would particularly affect Planned Parenthood.

“A win like this would immediately disentangle taxpayers from the abortion business and energize the grassroots as we head into the critical midterm elections,” Marjorie Dannenfelser, president of the Susan B. Anthony List, a group that opposes abortion, said in a written statement.

In a conference call with reporters, Planned Parenthood officials said they would fight the new rules.

“We’ve been very clear, Planned Parenthood has an unwavering commitment to ensuring everyone has access to the full range of reproductive health care, and that includes abortion,” said Dawn Laguens, executive vice president of the Planned Parenthood Federation of America.

Here is a guide to what the proposal could do and what it could mean for Planned Parenthood and the family planning program:

What is Title X?

The federal family planning program, known as “Title X,” is named for its section in the federal Public Health Service Act. It became law in 1970, three years before the Supreme Court legalized abortion in Roe v. Wade. The original bill was sponsored by then-Rep. George H.W. Bush, R-Texas, and signed into law by President Richard Nixon.

The program provides wellness exams and comprehensive contraceptive services, as well as screenings for cancer and sexually transmitted diseases for both women and men.

In Texas, Abstinence-Only Programs May Contribute To Teen Pregnancies

In 2016, the most recent year for which statistics have been published, Title X served 4 million patients at just under 4,000 sites.

What is Planned Parenthood’s relationship to Title X and Medicaid?

Planned Parenthood also gets much more federal funding for services provided to patients on the Medicaid program (although not for abortion) than it does through Title X. Eliminating Medicaid funding for Planned Parenthood has proved more difficult for lawmakers opposed to the organization because the federal Medicaid law includes the right for patients to select their providers. Changing that also would require a 60-vote majority in the Senate. So that particular line of funding likely is not at risk.

Legal Medical Abortions Are Up In Texas, But So Are DIY Pills From Mexico

Texas, Iowa and Missouri in recent years have stopped offering family planning services through a special Medicaid program to keep from funding Planned Parenthood. Texas is seeking a waiver from the Trump administration so that its program banning abortion providers could still receive federal funding. No decision has been made yet, federal officials say.

Why is Planned Parenthood’s involvement with Title X controversial?

Even though Planned Parenthood cannot use federal funding for abortions, opponents of abortion rights claim that federal funding is “fungible” and there is no way to ensure that some of the funding provided for other services does not cross-subsidize abortion services.

Planned Parenthood has also been a longtime public target for forces that oppose abortion rights because it is such a visible provider and vocal proponent of legal abortion services. In the early 1980s, the Reagan administration tried to separate the program from its federal funding by requiring parental permission for teens to obtain birth control.

That was followed by efforts to eliminate abortion counseling. Starting in 2011, in an effort to get the organization defunded, undercover groups accused the organization of ignoring sex traffickers and selling fetal body parts. Planned Parenthood denied the allegations, which were proved false in court.

What happened the last time an administration tried to move Planned Parenthood out of Title X?

In 1987, the Reagan administration proposed what came to be known as the “gag rule.” Though the Trump administration’s new proposal is not yet public, because the details are still under review by the federal Office of Management and Budget, the White House released a summary, saying the new rule will be similar although not identical to the Reagan-era proposal.

Before ‘Roe v. Wade,’ The Women of ‘Jane’ Provided Abortions For The Women Of Chicago

The original gag rule would have forbidden Title X providers to offer abortion counseling or refer patients for abortions. It would have required physical separation of Title X facilities from those that provide abortions and would have forbidden recipients to use nonfederal funds for lobbying, distributing information or in any way advocating or encouraging abortion. (The Planned Parenthood Federation of America, the umbrella group for local affiliates, has a separate political and advocacy arm, the Planned Parenthood Action Fund.)

Those rules were the subject of heated congressional debate through most of the George H.W. Bush administration and were upheld in a 5-4 Supreme Court ruling in 1991, Rust v. Sullivan. Even then, the gag rule did not go into effect because subsequent efforts to relax the rules somewhat to allow doctors (but not other health professionals) to counsel people about the availability of abortion created another round of legal fights.

Eventually the rule was in effect for only about a month before it was again blocked by a U.S. appeals court. President Bill Clinton canceled the rules by executive order on his second day in office, and no other president has tried to revive them until now.

How is the Trump administration’s proposal different from earlier rules?

According to the summary of the new proposal, released Friday, it will require physical separation of family planning facilities from those that provide abortions, will repeal current counseling requirements, and will ban abortion referrals.

One of the biggest differences, however, is that the new rules will not explicitly forbid abortion counseling by Title X providers.

But Planned Parenthood officials say that allowing counseling while banning referrals is a distinction without a difference.

“Blocking doctors from telling a patient where they can get safe and legal care in this country is the definition of a gag rule,” said Kashif Syed, a senior policy analyst for Planned Parenthood.

All proposed rules are reviewed by the OMB. Sometimes they emerge and are published in a few days; sometimes they are rewritten, and it takes months.

Meanwhile, Planned Parenthood officials say they will not know whether they will take legal action until they see the final language of the rule. But they say they do plan to use the regulatory process to fight the proposed changes that have been made public so far.

Kaiser Health News is a nonprofit news service and an editorially independent program of the Kaiser Family Foundation. It is not affiliated with Kaiser Permanente. KHN’s coverage of women’s health care issues is supported in part by The David and Lucile Packard Foundation.