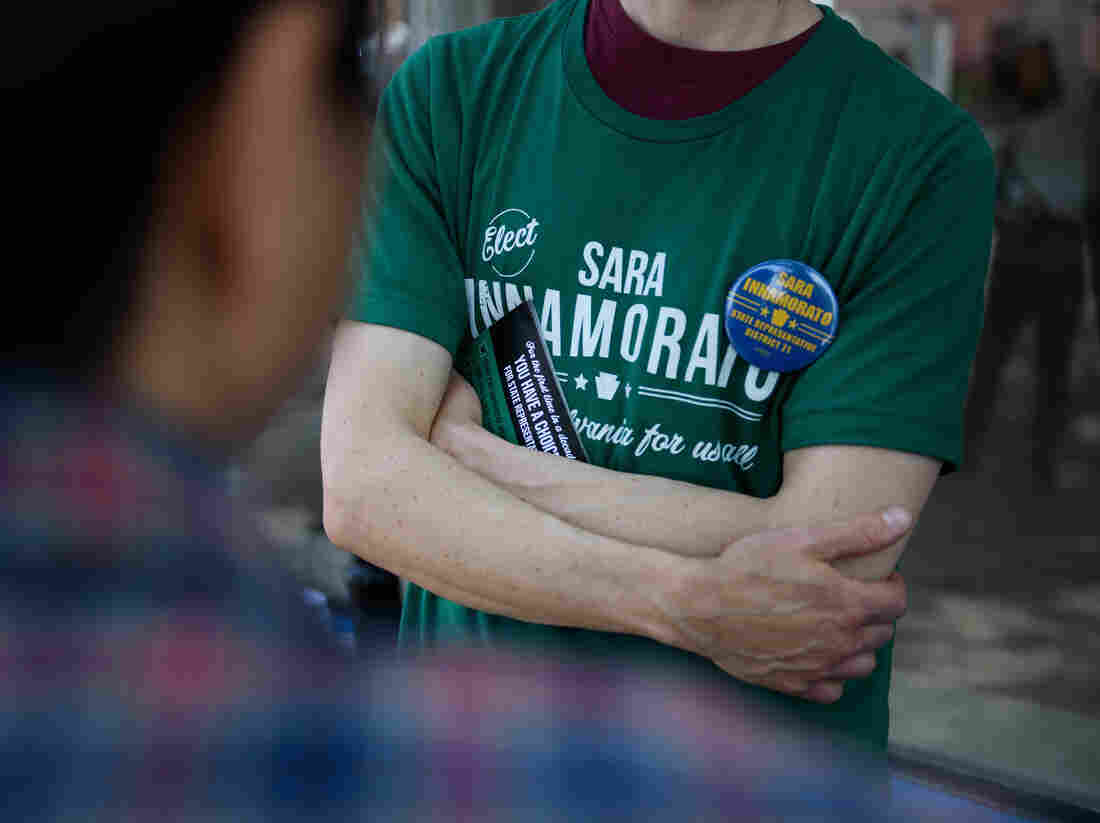 A campaign worker wears a shirt in support of Sara Innamorato outside a polling location at the Oakmont United Methodist Church in Pittsburgh. The first-time candidate declared victory over a five-term incumbent in the Democratic primary for House District 21. Bloomberg/Bloomberg via Getty Images hide caption 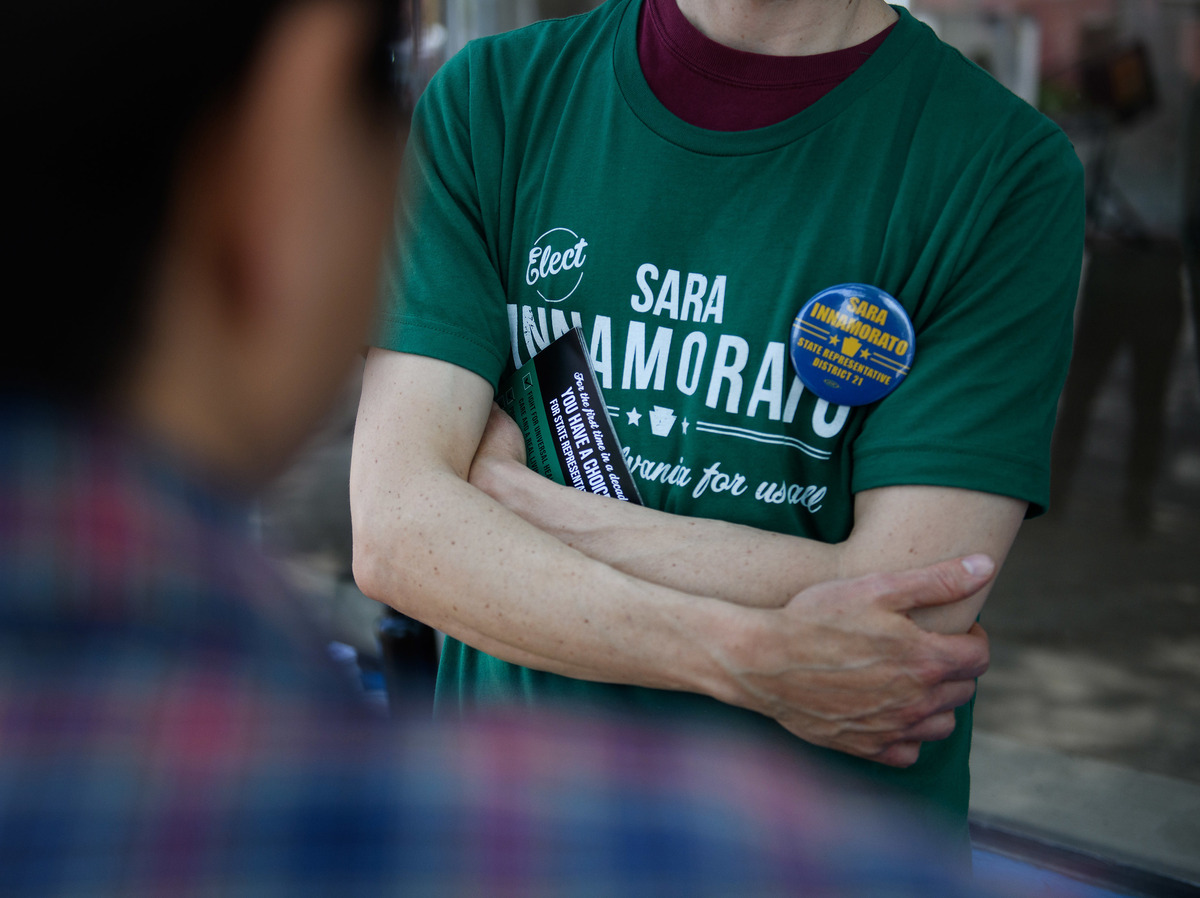 A campaign worker wears a shirt in support of Sara Innamorato outside a polling location at the Oakmont United Methodist Church in Pittsburgh. The first-time candidate declared victory over a five-term incumbent in the Democratic primary for House District 21.

Even as Pittsburgh undergoes a tremendous economic and cultural shift, its political landscape has often resisted change. Only one of its nearly two-dozen state House representatives is a woman, and even many of the area’s Democratic legislators skew conservative on social issues.

Then this week’s primary happened and two candidates, endorsed and backed by the Democratic Socialists of America, toppled two members of a prominent Democratic political family.

First-time candidate Sara Innamorato declared victory over a five-term incumbent, Dom Costa, in the Democratic primary for Pennsylvania House District 21. That district includes some of Pittsburgh’s burgeoning eastern neighborhoods and suburbs to the north.

It’s time for a new voice, a new vision and a Pennsylvania for us all. Pledge your vote now at https://t.co/xSFqx02Dss pic.twitter.com/aC1fXzoWls

“It’s not just about winning,” Innamorato told supporters. “It’s about who is now engaged in the civic process that felt excluded before.”

On the other side of town, Summer Lee claimed victory over Paul Costa, a distant cousin of Dom, in the 34th state House District just east of Pittsburgh.

“If your politicians are not serving you, get rid of them,” Lee told her backers. “And if you don’t have anyone to vote for, run.”

As seen on TV! pic.twitter.com/IyPNojbZkJ

Neither Innamorato nor Lee will face a Republican challenger in November. Once elected, they will triple the number of female legislators representing Allegheny County. Lee will be the first African-American female elected to represent the area.

The Costa family has been deeply rooted in southwestern Pennsylvania politics for decades: Paul Costa’s brother, Jay, is the Democratic leader in the state Senate. And Dom and Paul Costa are experienced legislators, Dom for one decade and Paul for two.

Both were endorsed by area unions and the Allegheny County Democratic Committee, but Pittsburgh is changing, all sides agree. The city’s emergence as a center for medicine and higher education is attracting a younger less conservative, demographic. That, combined with increased activism around progressive issues like a $15 minimum wage that Lee has advocated for, has put more conservative Democrats on the defensive.

While both Paul and Dom Costa are union-friendly, they skew moderate to conservative on social issues like abortion and guns. Lee and Innamorato challenged them from the left, pledging to fight for causes that included environmental justice and a Medicare-for-all health coverage system.

Pittsburgh’s Democratic Socialists of America chapter hailed the wins as proof that “a renewed, vibrant left in America is not an aberration,” but a sign “that working people are ready for real change, progressive policies, and a society that works for all of us.”

Such challenges are becoming more common in a time of political ferment, says Chris Borick, a pollster at Muhlenberg University. Since the election of President Donald Trump, he says, “You have more moderate Dems, or more mainstream Democratic candidates, in a position where they’re having to fend off challenges from the left.”

Both challengers benefited from the energy of the Democratic Socialists of America, whose 500-member Pittsburgh chapter conducted intensive door-knocking throughout the campaign.

A third legislative candidate backed by the group, Kareem Kandil, lost a three-way Democratic primary north of Pittsburgh. Still, University of Pittsburgh political science professor Kristin Kanthak says, after Tuesday, “You should expect to see big changes in terms of what the Democratic Party in Allegheny looks like.”

Tuesday’s results, Kanthak predicts, will “wake up both parties to the fact that we can’t just keep running the same candidates. Voters are going to be wanting to see something a little different.”